Introverted Thinking (Ti): Viktor speaks little and chooses his words carefully.  Although he is widely beloved across the wizarding world, he is largely indifferent to, say, the favoritism he receives from his headmaster, or the constant swooning of fangirls.  His method of rescuing Hermione in the second Triwizard task is not so straightforward, but it does have some theoretical sense.  When Viktor suspects a more-than-friendly relationship between Harry and Hermione, he questions Harry in private in order to inform himself; in doing this, he not only puts more stock in words than empirical evidence, but he also shows obliviousness to the social implications of talking to Harry under these circumstances (because he is from a Dark Arts-oriented school, Durmstrang).  As a Seeker in Quidditch matches, Viktor largely operates alone, leaving teamwork to the other players. END_OF_DOCUMENT_TOKEN_TO_BE_REPLACED

Introverted Thinking (Ti): All his life, Paul has primarily thought using logic and rationality; this ability was honed by his training as a mentat (a human trained to think only with logic to the exclusion of emotions). As he starts to consume more and more spice, Paul can summon up virtually any factual information he wants to, but this is not enough for him; he has to analyze and evaluate the information he does access from all sides. Paul decides for himself which social norms make sense and which don’t, and once in a position of authority among the Fremen of Arrakis, he starts to do away with Fremen customs that he finds stupid or counter-productive (fights to the death among the strongest soldiers to establish the right to lead, sending the blind into the desert to die). He later does the same with high society on a galactic scale; as an emperor, he rejects attempts to constitutionally limit his authority, as his power (as only one person) is already limited. Paul is forever asking questions about things he sees or reads, whether the identity of a girl he sees in a dream, or if he is becoming the next Genghis Khan or Adolf Hitler. END_OF_DOCUMENT_TOKEN_TO_BE_REPLACED

Dominant Ti: Unlike her Te-using friend Eustace, Jill operates based on an interior sense of logic that is not necessarily based on empirical evidence. As a result, she is the only Friend of Narnia who is willing to believe that other worlds exist before she enters one. Jill generally prefers taking a rational approach to life, and she can be disdainful of people who lose control of themselves. When she is faced with a difficult situation, one of her first reactions is usually to focus on remaining cool and calm. She sometimes misses the larger significance of events, which annoys Eustace (especially on the occasions when she interrupts his reasoning process to emphasize details that he considers unimportant). Jill is not a controlling person. She can, however, be very critical of other people when they are behaving irrationally or (in her mind) wasting time. As a result, she and Eustace often argue. She does not verbalize all of her thoughts and is irritated when Eustace ruins her declaration of loyalty to Tirian by pointing out that they cannot return home anyway. END_OF_DOCUMENT_TOKEN_TO_BE_REPLACED

ComradeJocasta asked: Is it possible that upper-Se users might be more likely to gesture a lot when they speak?

I haven’t actually found much research on this topic. However, I’ve given it a bit of thought, and I’d like to hear everyone else’s thoughts as well.

My ESFP sibling definitely is NOT a hand talker. However, he does have a strong need for touch and physical contact with people he’s comfortable around. Same goes for my ISFP roommate.

Out of anyone in my family or friend group, I’m actually the one who talks most via my hands. However, I don’t necessarily attribute this to my Se function so much as to the fact that I’m relatively fluent in Sign Language. Before I learned Sign Language, I didn’t gesture at all when I spoke, but now talking and gesturing practically go hand in hand for me (wow, that was a terrible pun).

It’s the same with any language. As soon as you’re fluent in more than one language, and especially if you know more than two, it’s hard to force yourself not to blend the elements of each. At the same time, you also keep many elements very separate as well (for instance, I swear a lot more in German than I do in English).

Upper Se-users. Now is your time to talk! I’m interested to hear whether you talk with your hands.

I stumbled across while typing a request.

Skip to about 2:30 for a full dose of real-life ISTP prankster.

Ti: Tris analyses the situation before leaping to action. She primarily uses common sense, and it shows—especially in the way how she’s constantly scolding herself whenever her ‘irrational’ feelings overwhelm her, and she would never let herself to be led around by them, not under any circumstances. She suppresses her emotions because of her craving for staying true to her own logical system at all times. Tris doesn’t have a tendency to organize her thoughts outside herself—neither verbally nor visually—because she struggles through complex problems in silence, within her head. She always thinks of something, then acts on it without telling anyone about it, for example when without a word she went to climb the Ferris wheel. Tris also spends a great deal of time analysing herself for better understanding of herself, and to determine what her intentions were when doing some of her acts, for instance when she went back to the net and recalled the moment when she jumped off the rooftop—she analysed the scenario and came to the conclusion that she hadn’t done it to be like the Dauntless, but because she had already been like them and wanted to show herself to them, while simultaneously acknowledging a part of herself that Abnegation demanded that she hides. END_OF_DOCUMENT_TOKEN_TO_BE_REPLACED 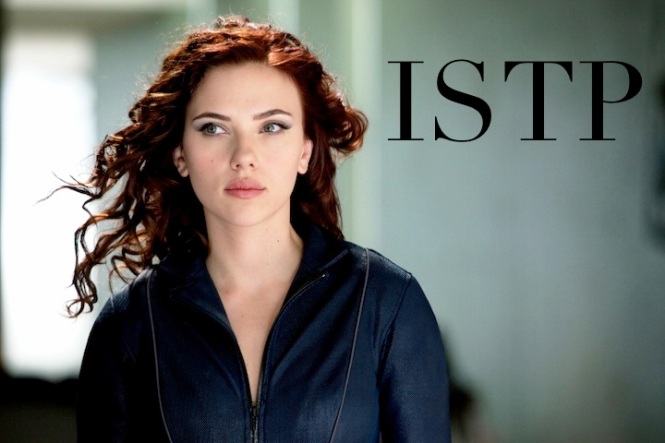 Ti: Doesn’t have any drive to be in charge or monitor progress unless it directly relates to what she’s doing. She’s perfectly willing to work under someone, such as Fury or Steve Rogers. She doesn’t willingly express her feelings until they’re drawn out of her, as shown in Winter Soldier. She makes decisions based on logic rather than feelings: in Avengers, when Hawkeye was roaming around the helicarrier brainwashed, she agrees to track him down and take him out because she was able to, despite her reluctance to fight her friend and the fact she was visibly shaken from her encounter with the Hulk. END_OF_DOCUMENT_TOKEN_TO_BE_REPLACED

Dominant Introverted Thinking (Ti): Owen Harper is analytical and detached. He is quick to make judgements that allow him to jump into action before most people have finished sizing up a situation. Owen doesn’t hesitate to poke fun at stupid comments or illogical suggestions. He doesn’t often share his thoughts with others. When he needs to think through something, he retreats to somewhere that he can be away from his friends. END_OF_DOCUMENT_TOKEN_TO_BE_REPLACED

Uhw asked: If you are a Intj, you should know the meaning of life, which is enjoy the life (considering that the life of a human being is 80 years and he takes nothing beyond).

So, you agree that istp and estp are the best types of the world?

You do recall that I am studying philosophy at university level, right?

Your syllogism is sound, but invalid. Let me explain by taking it apart for you.

Therefore I can conclude that xSTPs are the best MBTI types

First of all, we have not established between us that the meaning of life is to enjoy life, so your first premise is called into question. Secondly, you have none of your premises suggest that xSTPs enjoy life more than say xSFPs, so you cannot conclude based on either premise that xSTPs are the “best” (you have also not defined “best”).

That considered, I believe the meaning of life is much more complicated than you might suggest and has more to do with morality than to do with enjoyment.

Ti: Katsa’s survival skills are enhanced by her studies and knowledgeability. Katsa’s nature is serious, but her worldview and logic aren’t based on the same logic as the rest of the world’s. She doesn’t always catch on to people’s jokes and tends to take things too seriously. She isn’t afraid to voice uncomfortable questions, as she tends to be rather detached. She doesn’t talk about her thoughts where she doesn’t have to and doesn’t really enjoy social settings.

Se: Katsa tests her body to the limits, and even studies it to understand it better. Katsa is built to survive, be it through the awareness of her physical world or through her physical abilities. She’s impulsive and doesn’t always plan out her actions before she carries them out. She likes new physical experiences and lets himself get carried away with Po.

Ni: She knows perfectly well that she’s capable of killing people by reflex, and to avoid this, she tries to predict her opponents moves. She’s reluctant to trust people at first, and tends to be a bit judgmental. She’s good at pinpointing problems with plans and can visualize what she needs to do to get to where she wants to be.

Fe: She tends to jump to assumptions about people based on stereotypes. She doesn’t want to hurt people, and has to come to terms with her abilities. She tends to repress her emotions and doesn’t really understand them. Instead of facing them, she engages in various physical activities to get her mind off of them.

Ti: Bard thinks quickly, silently, and on his feet. He’s analytical and able to make decisions in split seconds by comparing multiple angles in his head. Though he keeps most of his thought process to himself, he’s willing to step up and interrupt when people are getting irrational, and his influence is often able to prevent poor mob-mentality actions. He chooses his words carefully and uses them minimally. END_OF_DOCUMENT_TOKEN_TO_BE_REPLACED

Ti: It wasn’t uncommon for the Baron to ask the uncomfortable questions or assert odd opinions, but most of the time he didn’t really share his thought process with others. He was a man of few words and didn’t particularly enjoy social parties. END_OF_DOCUMENT_TOKEN_TO_BE_REPLACED

The Last of Us 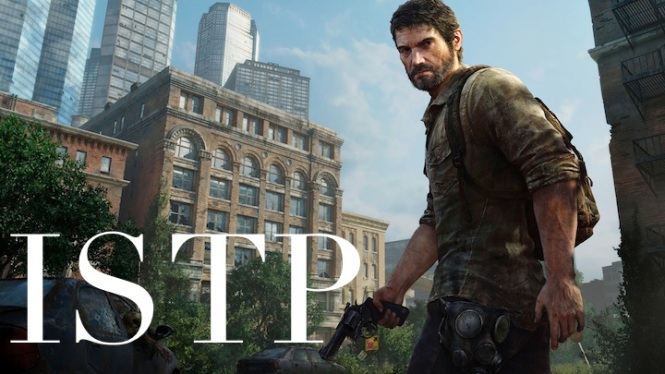 Dominant Ti: Joel understands mechanical and logically subjective systems particularly well; his ability to consistently problem-solve in a world without typical constraints like order and social standing ultimately insure his continued survival. He maintains a survivor’s mindset both before and after Sarah’s death, unlike everyone else around him. Ironically enough, his default, unique worldview adapts quickly to the world after the outbreak since it doesn’t really need to do any adapting at all. Joel always finds a way to survive, finding ways to overcome difficulties of both the financial and fungal kind. Another tip-off: Joel rarely ever voices his thought process and doesn’t order his companions around much. He never comes across as domineering or controlling, unlike most extraverted thinkers. END_OF_DOCUMENT_TOKEN_TO_BE_REPLACED

Ti: Peter is good at figuring out how things work and though he can identify how to fix things around the house when they get broken, he doesn’t necessarily take action to do so. He doesn’t express his thoughts outwardly unless asked to do so and then he doesn’t always find the right words to say exactly what he means. END_OF_DOCUMENT_TOKEN_TO_BE_REPLACED 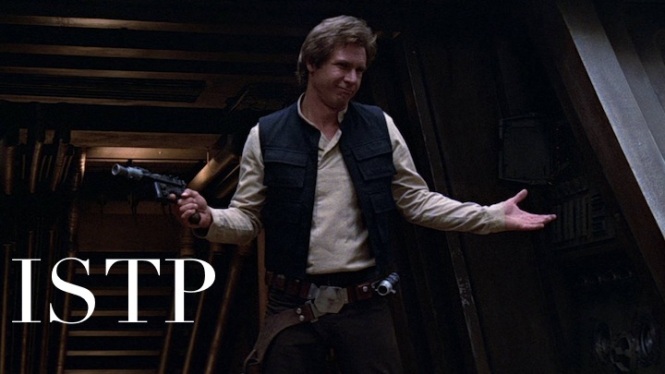 Dominant Introverted Thinking (Ti): Han readily points out flaws in other people’s plans. He likes to build things and make “modifications” to the Millennium Falcon. Han always needs to know why before he’ll join a cause, and is good at understanding technicalities. He doesn’t feel the need to rationalise his decisions to others and doesn’t particularly communicate his thoughts and motives very well. END_OF_DOCUMENT_TOKEN_TO_BE_REPLACED