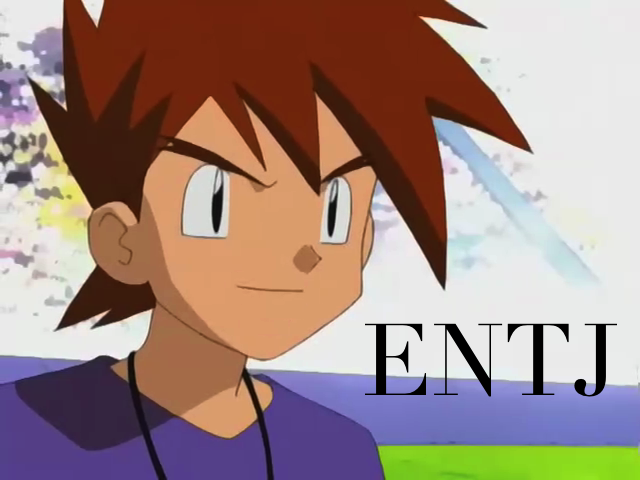 Extroverted Thinking (Te): Gary is results-oriented to the core.  In the time it takes Ash to catch around forty Pokemon, Gary catches over 200.  He wins ten badges for the Indigo Pokemon League, even though only eight are required for entry.  Rather than giving all his Pokemon equal training time, he concentrates on the ones that have given him the best results.  Gary does not travel alone early on; instead he travels in a car, delegating the responsibility of transportation (and maybe other responsibilities as well) to others.  Gary always manages to be one step ahead of his peers while journeying; Ash, while traveling through Kanto and Johto, sees or hears how far ahead of him Gary would be whenever he thinks he’s doing well.  He always has the relevant information ready for every task he attempts.  As a young boy, Gary is responsible enough to be entrusted with tasks beyond the capacity of most adults, such as holding guard at Lake Valor to protect the legendary Pokemon Azelf. 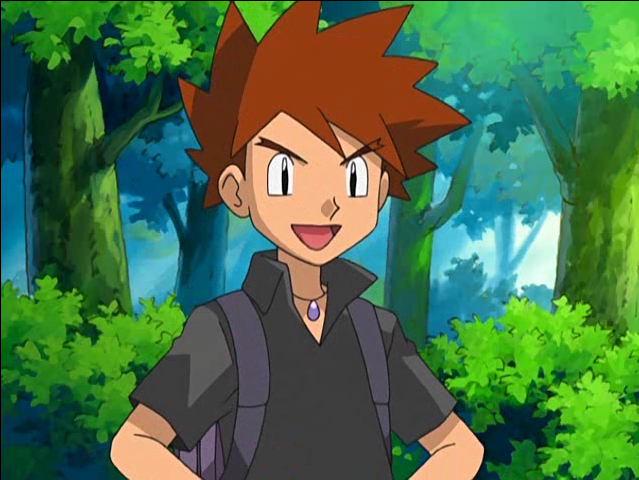 Introverted Intuition (Ni): Gary is successful as an extremely young trainer because he can plan ahead.  He keeps to the tasks that are necessary to accomplish his goals, not wanting to waste his time on pointless distractions.  When called on to help a construction manager deal with a group of Diglett ruining his project, Gary quickly quits when he sees that none of his Pokemon will come out of their Pokeballs to fight the Diglett.  During a battle, he can predict the Pokemon an opponent will use with a great deal of accuracy, and act accordingly.  He is also averse to taking big risks; while protecting a group of Shieldon, he avoids a Pokemon battle in order to ensure their safety.

Extroverted Sensing (Se): Gary likes the finer things in life, whether a vacation in a luxurious resort, a fancy car to take him around, or a squad of pretty cheerleaders to root for him during battles.  He has an attitude of “catch ’em first, ask questions later,” preferring decisive action over piles of information that might or might not be necessary.  Aided by his painstaking preparations, he can react to most new situations he encounters during battles, though he has trouble handling highly unorthodox tactics.  He likes being the center of attention, preferring to battle in front of an audience.

Introverted Feeling (Fi): Gary is very private about his feelings; they only come out when he is under extreme pressure.  Although he is friendly toward his Pokemon, he does not consider them to be his friends.  Although Gary does consider Ash to be an extremely valuable friend, he will rarely admit it to anyone.  In his bid to make a name for himself as a Pokemon trainer, it takes Gary some time to realize that he actually wants to become a Pokemon researcher like his grandfather.  When he does realize this, however, he pursues his passion with the same vigor that served him so well as a trainer.  Gary never likes to admit when he’s wrong about something, but he will do so when confronted with the direct evidence.

Note: Many people who type Gary type him as an ESTP.  This is a common mistake; ENTJs are often mistyped as ESTPs, and vice versa.  Possibly in Gary’s case, people look at Gary’s “catch ’em first, ask questions later” way of doing things and see dominant Se, while they view his charm to indicate Fe.  However, this analysis does not stack up to the total picture we get of Gary.

The “catch ’em first” outlook actually comes from a single line of his early in the anime; it definitely indicates Se, but not necessarily dominant Se.  In fact, if we compare Gary with Ash (who does exhibit dominant Se), we see the difference; both boys are doers, but Gary is a great deal more calculated and less impulsive in what he does than Ash is.

Gary’s charm also indicates Se; it is not in any way a sign of Fe.  In fact, Gary is not too emotional under normal circumstances; after a loss in the Indigo League, while his cheerleaders are crying over him, Gary shrugs them off, telling a concerned Ash, “They’ll get over it.”  Gary exhibits a very strong Te instead; he is not only a doer, but also an achiever.  After failing to meet a goal, he does not wallow in emotions, but dedicates himself to improving.