Fi: Edith is deeply emotional, though reluctant to share her suffering with even the people who are closest to her. She often feels that no one appreciates her and that she is an outsider in her own home. She sometimes has a difficult time paying attention to other people’s feelings because she’s so zeroed in on her own problems. She acts according to the beliefs that seem most authentically right to her and doesn’t ever ask for permission before doing anything. She wants to be needed by others and so she helps out with all sorts of things,  such as the hospital and the tractor driving for the farmer. Her best friendships are formed with people who are very similar to her, but has a hard time putting up with people who’s emotions are very different from her own (Mary, for instance). 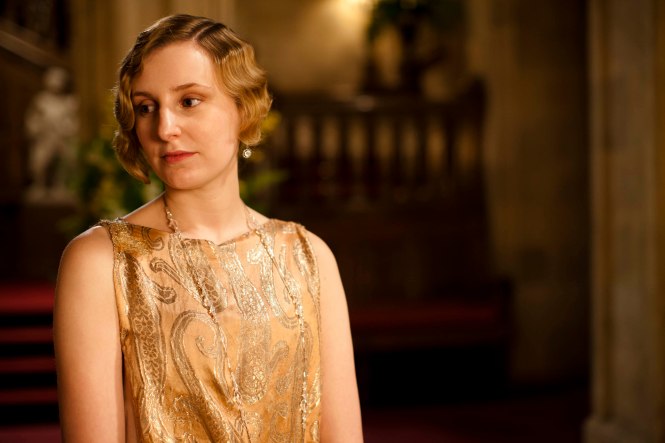 Se: She lives in the moment, often acting a bit too spontaneously for her own good. For instance, when she spills Mary’s secret, kisses a married man or gets pregnant out of wedlock. She likes to be doing things constantly (“I want to be useful.”) and because she gets bored around the house, she goes out to help people and gets a job working as a columnist. She’s agile and learns to drive and make herself physically useful around the house during the war. She has a love for beautiful things, be it dresses or hairstyles.

Ni: Edith figures out what she wants and goes after it quickly, but not without thinking. She’s good at isolating problems, such as potential dangers of getting involved with married men, but doesn’t always have the self-control to avoid it in the end because her FiSe gets the better of her. She has big dreams that extend beyond Downton and she wants her life to have meaning in it.

Te: Once Edith determines what she wants, she does everything she can to get it. She’s not very good at organising people, but she manages to do an okay job at it. She’s usually the one who makes the decisions in her relationships and she doesn’t allow her parents to dictate any of her choices.