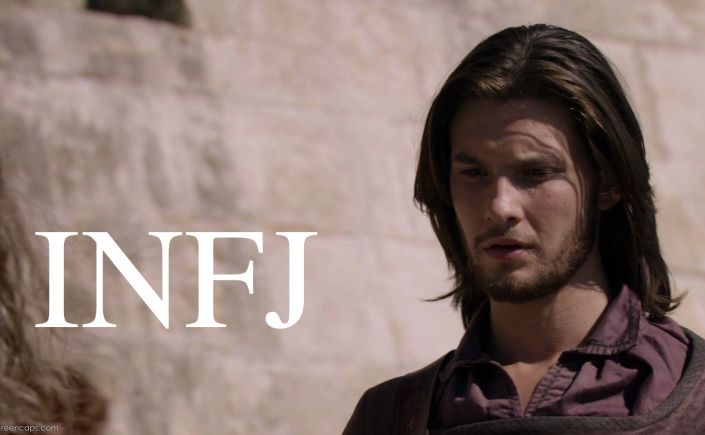 Dominant Introverted Intuition (Ni): Caspian is a dreamer. As a little boy, his nurse’s stories of Old Narnia capture his imagination, and Caspian’s view of the world is shaped by the stories. Rather than basing his value system on what he sees his uncle Miraz doing, Caspian’s ideals are formed by the heroic legends his nurse repeats to him. Caspian has no strong reason to believe that the old days could return until after he wakes up in the dugout of Trufflehunter, Trumpkin, and Nikabrik. Regardless, he prefers the Narnian moral code, even if he never meets a full-blooded Old Narnian. From a relatively young age, Caspian is driven to accomplish things that other people consider impossible. He successfully defeats Miraz and reawakens Old Narnia—despite the initial superiority of the Telmarine forces—and, as king, he goes on a difficult voyage to find seven Telmarine lords who disappeared when he was a small child. Near the world’s end, Caspian’s imagination almost gets the better of him. He is so fascinated by the thought of traveling to Aslan’s country that he wants to abandon his kingship and continue eastward. Aslan must directly intervene to prevent Caspian from abandoning his responsibilities to follow his imagination.

Auxiliary Extroverted Feeling (Fe): Caspian is almost unfailingly polite, and he usually makes a very favorable first impression on other people. Complete strangers who have good reasons to doubt Caspian’s words often end up trusting him after only a brief conversation. He tends to show his emotions: it is very clear to other people when he is excited or upset. Nevertheless, the intensity of Caspian’s imaginative life, as well as his desire to think the best of other people, sometimes clouds his ability to understand them. As a little boy, Caspian chatters happily to Miraz about Narnia without recognizing his uncle’s growing anger. As an older boy, Caspian misses the signs of his aunt’s pregnancy and has trouble understanding why he should feel threatened by the birth of Miraz’s son.

Tertiary Introverted Thinking (Ti): Unlike most Telmarines, Caspian needs little evidence to convince him to believe that Old Narnians existed. His form of logic is more rationalistic than empirically-based, and a very small amount of proof leads him to accept everything about Old Narnia—including things that even some Old Narnians no longer accept. Initially, Caspian’s idealism makes him relatively poor at developing battle plans: Doctor Cornelius and Peter Pevensie both play important roles in helping Caspian to become a better tactician. Caspian is good at recognizing the talents (and lack of talent) in the members of his army, but he tries to state his negative opinions about others as gently as possible (Fe-Ti).

Inferior Extroverted Sensing (Se): Despite his tendency to live inside his head, especially as a small boy, Caspian develops strong physical abilities over time. Through intensive training under Doctor Cornelius, Caspian becomes an excellent rider and swordsman. The Telmarines’ fear of the sea prevents him from spending time around water as a child, but after the Narnian victory, Caspian learns to swim well, despite his many duties as king. He also studies sailing and navigation, which help him to gradually rebuild the Narnian navy.