Ni: The 4th Doctor likes to predict what will happen before it does, and whenever he speaks his predictions out loud, he’s usually right, even if he can’t quite yet back himself up with logic. He can tell when people are lying to him and calls them out on it. He understands other people and planetary races intuitively and doesn’t have to ask many questions to find the answers he’s looking for. More than the other Doctors, he views flying around in the TARDIS saving the universe as a job, and allows himself a break from time to time. He is capable of improvising when he has to, but tends to make decisions in advance. He’s wired for problem solving and is good at spotting the patterns in his environment that are invisible to everyone else. He’s big picture oriented to the point that he’s totally fine with frequent near-death experiences. When in a stressful interpersonal situation, he faces it with sarcasm, rather than showing visible discomfort. 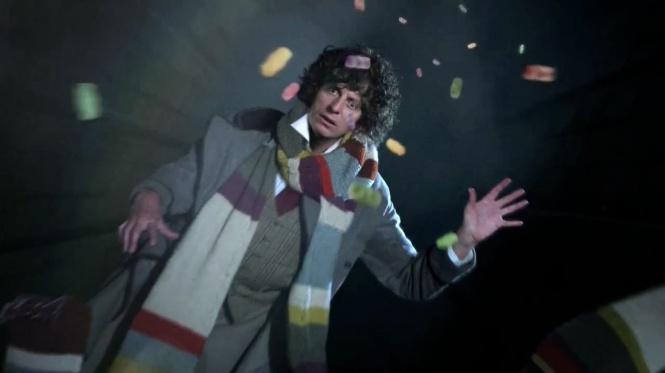 Te: The Doctor is less book-logical than he is practically logical. His logic focuses mainly on what he can use it for, which is partially why he finds it annoying when Ramona rattles of all the facts that she learned at the Academy. He doesn’t always pay particularly close attention to other people’s feelings, and tends to speak bluntly and honestly at all times. When a new problem arises, the Doctor faces it with logical calmness, rather than his emotions. He’s detached enough that he’s willing to let go of people when he has to, and is even more willing to sacrifice himself to save them. The Doctor is practically immune to personal criticism, unless…that is, it comes from a fellow Timelord. He’s good at organising people and delegating tasks so that he can narrow his focus to the more trying problems. He likes to be in charge, and gets extremely uncomfortable when Ramona steps in with all her knowledge.

Fi: The Doctor is forever loyal to those he befriends, and would do practically anything to save them from harm. At the same time, the Doctor does what he wants regardless of what other people tell him to do. For instance, when Ramona tries to convince him not to go fishing, play chess, or call her something other than Ramona, he ignores her completely. The Doctor shows love through action rather than words. The Doctor rarely talks about his feelings and tends to deflect personal questions with sarcasm. His internal principles are firmly set as to what he will and will not do, and he does not argue with them for anything. He’s easily able to set aside personal feelings to make harsh decisions, but in the end, is always happiest when being true to himself.

Se: The Doctor cares about his appearance….to the point of the scarf and yet, he also manages to use the scarf for its functionality by using it as a weapon (Te). In general, he’s capable of using his environment to his advantage when he has to, but tends to prefer planning ahead. The Doctor also has an appreciation for art, and willingly argues with Ramona as to whether the Mona Lisa is the most brilliant painting on earth, or in the universe.