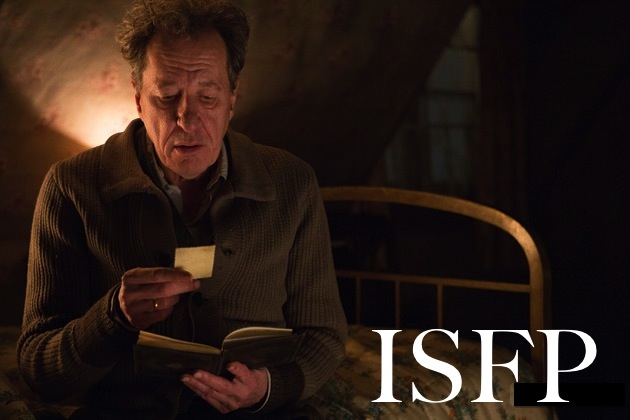 Dominant Fi: He is very certain of his own emotions and his own moral code, which has been developed over time and is very different to that of his family and most of the rest of Germany; for example, he chooses very deliberately not to join up to the Nazi party, even when most people start supporting it and the only thing that actually changes his mind is when his not being part of it begins to adversely effect his business and thus the wellbeing of his family, who he loves and values. He feels things deeply and is very sensitive to others emotions but he tends to work through his own emotions internally and in a personal manner, which leads to him being often quiet and contemplative, even with Rosa shouting at him most of the time. He keeps himself to himself and develops only a few relationships, with Liesel, Max, Rosa and Erik Vandenburg, but he cherishes those few very strongly. He is not judgemental of anyone and is compassionate and genuine, giving people chances to change, ie. Hans Junior; he also understands that his son has different opinions to him and hates the conflict that causes between them. He is true to his word and expects everyone else to be too, eg. He makes Liesel promise to keep reading in the bomb shelter whilst he’s gone and of course the whole reason that Max ever came into their lives was because he had maintained a promise he’d made on a whim many years prior, but his morals would never allow him to cross such a vow.

Auxiliary Se: He can occasionally be impulsive, especially when he feels that his morals have been snubbed or compromised in some way, for instance when he smashed his hand at the door and window of the NSDAP headquarters after seeing a Jew being terrorised and then told a member that he didn’t want to be accepted, or when he handed bread to the Jew in the parade; he realised these were errors but felt enraged because part of his moral code had been violated by others, so he had to act (FiSe). He also finds great enjoyment in sensory experience; he is a competent and respected painter by trade and he is creative in using his resources to his advantage, ie, using existing paint on the wall in the basement instead of paper to teach Liesel with. He loves music and playing his accordion, as it is a physical action which also carries important memories and emotions from the past. He is also fairly in tune with nature, for instance he chooses to take Liesel out to the Amper river to teach her and to play the accordion.

Tertiary Ni: He understands Liesel intuitively, from when they first meet he is the one who connects with her most easily, this means that when it came to explaining why she could not tell anyone about Max he knew exactly what to say to scare her, and he also focused very strongly on the long term future consequences of such an action. He is good at improvising his plans (SeNi) and he can often use his surroundings to help him, for instance when the man from the NSDAP comes to check the basement he quickly decides to behave as normal and to let the man go and check, even though Max is down there, because he knows that it is the only possible chance of safety. Although nothing can be certain about anyone’s future while Max is there, he tries to choose the best long term solutions, for instance letting Max come into the house during the night to stay warm; however, when it comes to long term plans he can sometimes fail to for see all the problems or possible divergences from the plan, ie. when he sends Max out for a few days whilst he is under the threat of inspection but Max did not return as he wanted to keep them safe. When this happens he becomes upset that he didn’t consider all the long term possibilities and becomes withdrawn.

Inferior Te: He is fair and precise when he speaks and he hates lying to Liesel, often only resorting to lies when he doesn’t want to hurt her feelings or endanger her, for instance he doesn’t tell her what a communist is or what it means for her dad to have been one in Nazi Germany. He is systematic in teaching of Liesel how to read, and even though he’s not the best reader he steps up to the challenge and makes it manageable and enjoyable by breaking it down simply and logically. As his Te is inferior he is perhaps more thoughtful than organised and task orientated, much to Rosa’s dismay, however he can be swift to make a decision and once it’s made he sticks by it and will defend it defiantly. He can be direct when necessary, ie. in an emergency, but even though it’s normally for the good of his family, he doesn’t tend enjoy it.