Once upon a time, I was a seventeen-year-old, bored out of my mind, even in my college-level classes. This boredom morphed into a sort of cosmic angst, anger at the fact that I was sitting in a classroom memorizing facts when I could be problem-solving somewhere else.

My sister tells me I looked like Sherlock pounding around the living room asking for a case.

Boredom is a very dangerous thing in immature INTJs because we’ll do pretty much anything to stop being bored (so long as it doesn’t violate our principles).

In 2014, @Ockham’s Chainsaw linked me to a post they’d written on the topic of intelligence, mentioning that NT types are often reluctant to say, “I can’t do it,” or “I don’t know,” when taking a test because they have firm confidence in their ability to figure the problem out, even if they don’t know the answer.

The following piece of writing consists of the notes I recorded while solving the Einstein Riddle to stop being bored when I was in high school, and it’s a perfect example of Ockham’s idea. 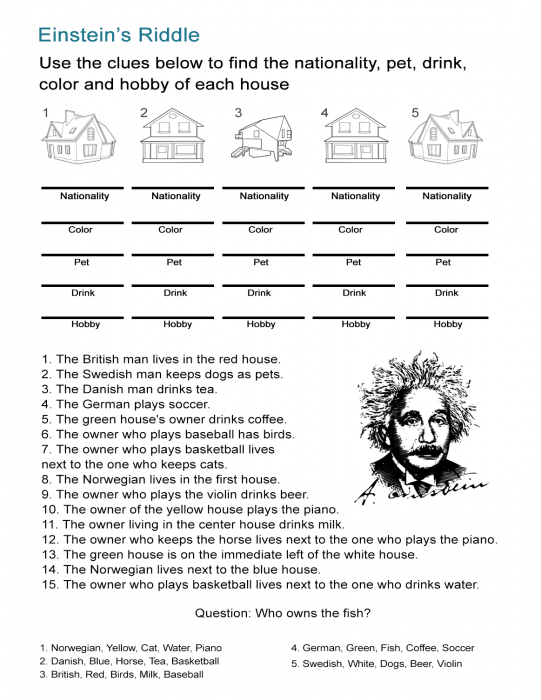 Actually, it is easy. You just have to believe it. The problem with the 98% of people who can’t solve this riddle is that they lack the patience and the solid logic necessary to tell themselves that they can do it. As it turns out, I fall into the 2% that can effectively solve this riddle without googling instructions (since that’s no fun for an INTJ).

Come on, people. If you think you can’t do it, you’ve been watching too much telly.

I started with what I knew for sure.

Next, using a graph, I decided to slowly decipher various details about each:

Next, I made a graph of what I knew (in order of houses):

I knew then that the water drinker could only belong at the yellow house because:

From this, I determined that the Blue house-owner smokes Blend (because Blend is neighbors with water).

Next, I looked specifically at one clue: the owner who drinks beer smokes Bluemaster

Well, there was one obvious hole there…looks like blue drinks tea and is a Dane….

I deduce that the German lives in the green house because:

We can easily see from looking at the graph that the only place left for our tea-drinking Dane is Blue.

That leaves white to be the dog-owning Swede and the green to own the fish.

The German owns the fish!

3 thoughts on “A Riddle for an INTJ”