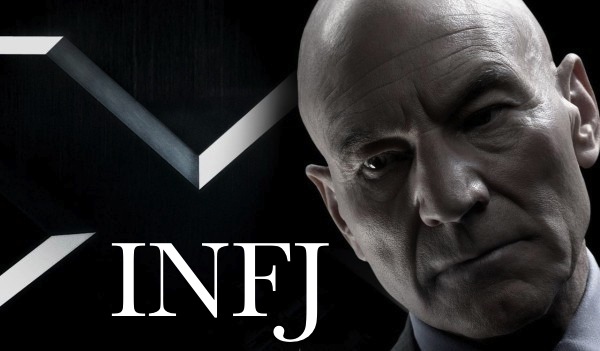 Introverted Intuition (Ni): Charles is a mutant who has the power of telepathy (and to some extent telekinesis), but can also recognize what is going on in the minds of others very easily without having to read their minds. Thus many times when he is asked, “so did you read my mind,” he responds, “I didn’t have to.” Charles is extremely focused towards a long term goal (to make the society accept the mutants) and all of his actions are directed towards achieving it. Towards this goal, he has a very visionary, idealistic approach. His being the most powerful brain on the planet also gives him the a fair idea of ‘what comes next’ as that kind of thought requires a calm and detailed analysis (Ni) than a quick and some-what impractical response (Ne). This gives him a bit of a mystic charm. Like Magneto, he has a very specific approach to problem solving, a fact which is often the root stressor of their disagreements.

Extraverted Feeling (Fe): When he is younger, Charles has a very strong desire to fit in with society. As Charles is portrayed, his Fe function is probably his most developed (most likely because he knows what everyone’s true thoughts and feelings are (you know cause he is telepathic). Charles is constantly thinking about how other people, humans and mutants alike, would be affected by the actions his X-men take. He often tries to convince Magneto that his actions will only make people feel more passive about the mutants. When asked ”How can you be so sure about how they (army) will react?” he answered,” Because I know how they feel.” Charles sympathizes with other mutants and tries to connect with them emotionally without using his psychic powers, so obviously he uses his Fe. He loves to provide emotional support to others and becomes deeply depressed when he feels that he cannot help others to work through their struggles.

Introverted Thinking (Ti): Charles is very intelligent and thinks deeply about the issues that the mutants face. He thinks about problems from many different angles, and likes to use his knowledge to show off to the ladies. At the same time, he is far more driven by emotional idealism than by any logical course of action. When arguing with Magneto, the issues they disagree on usually have to do with their moral approach to fighting for the mutants. Unlike Magneto, Charles does not have a specific step-by-step plan that he intends to follow in order to help the mutants. Instead, he tends to think in terms of theoretical problem-solving, rather than practical.

Extraverted Sensing (Se): Charles notices the world keenly and recognizes the fine changes that have taken place. For instance, when he says, “you have grown older, Logan,” to Wolverine, a guy who practically hasn’t changed a bit since the adamandium experiment. The younger version of him certainly likes a good party, but at the same time, he tends to prefer a quiet life. He isn’t usually one to be found at the center of the action, but would rather fight fire with theory (TiSe) —not always the best strategy, in case anyone didn’t notice.