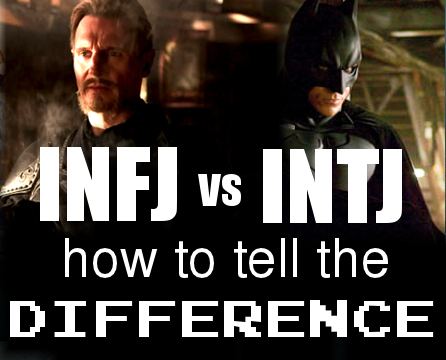 Loads of people get it into their heads that the sole difference between INTJs and INFJs is that the latter are sweet and kind while the former are complete apathetic jerks. Unfortunately, this assumption is based on stereotypes and doesn’t include the jungian functions at all.

In my experience, there are plenty of both types that defy the stereotype beyond reason, to the point that MBTI-Typers who go based on stereotypes are bound to get them wrong.

This type of behaviour can also be observed if you watch Sherlock.

INxJs share two common functions: dominant Ni, and inferior Se. As a result, it’s easy for the two types to relate to one another on many levels.

Ni dominants are…it seems the most likely to get existential depression as children. I had it, Ender Wiggin certainly had it etc. the reason for this is that Ni doms are rigged for pattern recognition and philosophical thinking.

They will both be prone to existential crises (aka, frequent midlife crises) during childhood and youth, that most people don’t experience until they hit 40…mostly because INxJs think too much.

Both INTJs and INFJs are big-picture, future oriented, but also have a narrow goal focus. Both are likely to be ambitious and are known for picking out career paths as very young children. They are likely to be disciplined and so focused on their goals that they often fall prey to the absent-minded-professor syndrome, in which they forget to eat, wash or take care of themselves because they’re so focused on their goal.

In the case that the INxJ doesn’t have a grand life-vision (and this does happen), the INxJ will likely be quite unhappy with their life and…immature for an INxJ. The reason for this is that the life-vision constitutes a major portion of the INxJ’s dominant function, and when a dominant function is neglected, the results tend to be negative. Take a look at Thomas Barrow from Downton Abbey if you want a picture of what this looks like.

INxJs are good at predicting the future intuitively and usually like to plan ahead to keep themselves safe from danger.

Both are extremely good at strategizing, because they notice patterns so easily and then form logical conclusions about those patterns.

I’m an INTJ and one of my room-mates is INFJ. Both of us notice immediately if any of our belongings get moved, whereas our two other Si-using roommates never notice if their stuff gets moved. We both are incredibly aware of our environments and are more likely to sit down and watch a sunset than our Si-roommates.

We’re also more coordinated than our Si-roommates. I will often sit for hours working out a philosophical problem, and upon solving it I will promptly leap up and over furniture to get to the kitchen because I was so focused that I forgot to feed myself. It seems to amuse my ENTP and ESFJ room-mates quite a lot.

I have also been known to dash for auto-lock doors before they closed because I didn’t want to unlock them to go through. They like to call me an undercover ninja. My INFJ room-mate has attained the reputation of undercover CIA agent.

Both INTJs and INFJs will likely be visual learners and will either need to write things out or draw them to learn them properly.

INxJs are prone to zoning out of reality for long periods of time, so that they live a great deal in their heads. When working out a complicated problem, I tend to be unaware of most of what’s going on around me unless I’m specifically using my environment to solve the problem.

If it’s a hands on problem that uses external evidence, then I’m readily tuned to details in my environment and ready to use them to my advantage. On the other hand, it it’s a theoretical problem that doesn’t involve empiricals, I completely forget my physical environment exists.

When I’m in this zone, I miss all kinds of crazy things –loud things even.

They both understand people extremely well, but they do so using slightly different function combinations. Both will use Se to observe people, feeding their Ni with fairly accurate ideas of people and situations before they can prove it. They tend to reach equally accurate conclusions, but the difference lies in their Auxiliary function.

The INTJ will reason out logically what a person thinks and feels using Te (after the NiSe does its magic) and will be able to accurately describe what a person feels and why they feel that way AKA Speaker for the Dead. Ender Wiggin can accurately know pretty much everything there is to know about a person before being able to prove it (NiSe), after which he hacks into all their computers to prove his conclusions with actual evidence (Te).

On the other hand, you have INFJs, such as the 8th Doctor, who can pinpoint equally accurate ideas of people, after which…he does nothing to logically back up his conclusions. “Don’t be sad, Grace,” he’ll say, but have no evidence as to how he knows this. He’s good at figuring out his enemies’ motivations simply by being in the room with them. He simply observes (Se), and then simultaneously intuits and reads people’s emotions (NiFe).

I have been accused of being a telepath before for knowing things about people that they had never spoken out loud. In times past, I considered myself a sort of Speaker for the Living, because I would write tributes to different people that I heard others judging so that those people could be understood for who they were and not who they appeared to be on the surface.

INTJs will be more organised (Te), but strangely less able to keep a schedule than INFJs because the INFJ’s Fe will give them a greater desire to follow rules and keep social norms, such as not being late to class. INTJs will more likely prioritise their theoretical thought processes than their schedule.

In my mind, a schedule translates to a trivial, but stressful priority.

The Auxiliary function will also dictate how they communicate.

The INTJ is likely to be blunt (Te), and if not blunt, sarcastic. When they speak, they will either sound like a complete pessimist, or an unrealistically idealistic person. The reason for this is that they want to find the absolute truth, and believe themselves to be utter realists. What most people hate about this, is that they’re usually right in their predictions.

Two examples. I was on a car trip across-country with my family and ended up in the middle of nowhere with no gas. Somehow, I intuitively knew we would be fine, and while my family was complaining about how we were doomed and going to be stranded out there until someone came to help us, I was telling them we would be fine.

You can imagine no one wanted to believe me, and…what they all felt when they found out I was right.

Example two: is the deplorable situation when I know everything is going to go completely wrong, and everyone else wants to believe everything is fine. Of course, my Fi need to be absolutely true to myself leads to me wanting to speak only the absolute truth. Naturally, I can’t help speaking my predictions and sounding like a pessimist. In the moment, everyone complains about what a downie I am, and after my prediction comes true, they all avoid my gaze.

The INFJ on the other hand, is more likely to try to sugarcoat their predictions so that they sound nicer and less pessimistic to non-realists. The INFJ will be more accommodating in their communication style, still sarcastic, but less sardonic.

In general the INFJ’s Fe will make them more approachable than INTJs as they will be more charismatic and accommodative, whereas, if the INTJ doesn’t want to talk to you, they willx just ignore you.

When it comes to arguments, the INTJ will more likely try to convince you using logical appeals, whereas the INFJ will use emotional appeals.

While both the INFJ and INTJ are goal-oriented, the INTJ will be more likely to realise those visions because of Te action-orientation. As a result, if either of the two is least likely to change majors in college, it’s the INTJ.

Both types will have Ni ambition and visions for their future, but INFJ (Ti) may spend more time analysing it and less time realising it, whereas the INTJ (Te) will focus on achieving their goals whatever the momentary cost.

INFJs will most certainly maintain a constant interior dialogue, but don’t often voice it out loud, preferring rather to work through their thoughts in silence (Ti), or through writing.

While both types can be equally introverted, they will show it in different ways. The INFJ will be nice and socialise with people in public (Fe), and the INTJ will probably avoid this (though this isn’t always the case), but will talk to you quite a bit in private (that is, if you get close enough that they feel comfortable talking to you all the time).

The INTJ will understand his/her emotions extremely well and will analyse them (TeFi), but will be afraid of them, and will try to bury them (lower Fi) rather than embracing them. INTJs will often repress their feelings, to the point that they question whether they have feelings at all. The main way that an INTJ’s F function shows up is through principles. INTJs often have resolute principles and moral standards that they refuse to budge from.

INFJs will be more visibly emotional (Fe), while INTJs will be the people who have a resting-hate-face that doesn’t accurately portray what they’re feeling.

I have a loathing for traditions that is much Fi is more pronounced than my INFJ roommate’s minimum annoyance, because my Se is coupled with Fi and hers is coupled with Fe. FiSe is much more likely to make nonconformity into a strict moral code that is lived and embraced, whereas FeSe is likely to subconsciously maintain nonconformity if at all, but generally try to accommodate all people.

The INFJ will feel other people’s emotions and be affected heavily by them. Often, the INFJ will even be weighed down by all the emotions they are carrying around with them. They will often internalise other people’s feelings while misunderstanding their own feelings.

The INTJ will not feel other people’s emotions, and although they will likely understand both their own feelings and the feelings of others, they will often detach from both. Thus…the sociopath stereotype. Rather, the INTJ prefers to understand emotion by analysing it logically.

If you’re wondering about the INTJs that defy the jerk-stereotype and want further comparison between Fi and Fe, read the Sympathetic INTJs post

74 thoughts on “How to tell the Difference: INTJ vs INFJ”